The Top 10 Golden Rules of Argumentation

”These rules will make you a better lawyer – whether arguing by zoom, in court, or in a settlement conference in the judge’s chambers.

My inbox and Twitter feed have been flooded with top ten lists. Most of the advice is redundant and commonsense (lift weights, read more, get more sleep, etc.), but some of it is truly helpful. So, I decided to create my own top ten list.

Increasingly, I realize the importance of effective argumentation. Few hearings these days, at least in my court, are evidentiary. More often they hinge on arguments, informal ones, like a settlement conference, or formal hearings resolving an issue. With that in mind, here’s my contribution to the top ten repertoire.

1. Bait your hook for the fish, not the fisherman.

Remember to whom you are arguing. Too often, we flatter ourselves with our erudition and brilliance. But what really matters is impressing the person who will decide the issue: the judge. Clarence Darrow wasn’t Clarence Darrow because of self reverie; rather it was because his arguments appealed to those before whom he appeared. Give the judge concrete reasons to want to find in your client’s favor.

It’s critical that you know your judge. If your judge is more light-hearted, you might want to engage in some informal banter before getting to the heart of the issue. If the judge is more somber, a formal presentation is probably in order. Great salespeople understand the concept of rapport. Aren’t we salespeople after all? We just sell ideas instead of products. Increase the likelihood of making the sale by building rapport with your judge; focus on what they want to hear, rather than what you want to say.

Also, remember the judge’s goals are different from yours. What is the goal of most judges? To both follow the law, and resolve an issue fairly for both parties. Craft your arguments with this in mind. While occasionally a judge responds positively to fist-pounding, in my experience it rarely works. When you approach the issue instead with common sense and a problem-solving demeanor, a more satisfactory result usually follows.

2. Be dignified and respectful.

As the son of a lawyer, the gravitas of the judicial system was instilled in me as a child. This gravitas has sadly eroded. Many lawyers today treat a court hearing like a mud wrestling match at the county fair. Get out of the mud. Be dignified during your presentations. Don’t interrupt your opponent or engage in ad hominems. As Marcus Aurelius observed, the best way to deal with assholes is not to be like them. Trust me, the judges will notice (and reward) good behavior.

3. Clarify what you want first before getting into the “whys”.

We live with our cases for months and sometimes years. We internalize them and forget that the judge doesn’t know the facts as well as we do. Don’t just get up and start blabbing about how your client has been wronged. Give the judge a brass tacks context before starting your argument. First, start with what you are asking the judge to do, “Judge, we are here today seeking XYZ…..” Next, recite the relevant facts, ethically slanting them in your client’s favor. Finally, after these preliminaries are satisfied, argue the reasons WHY your “ask” is the correct result. To recap:

This practice serves two purposes. First, it helps you clarify what you are seeking. Seeing it in writing brings insights. You may determine it’s a hail mary that is unrealistic. I often clarify my thinking by writing it down; this exercise will help you do so as well. This practice also helps the judge. When you provide a proposed order at the beginning of your presentation, it’s like a playbill at the theater. The requested relief is clear and the judge can follow along as the argument unfolds. Also, when a busy judge has the order in front of him or her, there is the possibility that the judge will just sign it to move on to the next case.

5. Know the facts and the law.

As I mentioned above, we internalize our cases when we live with them for extended periods. As such, we tend to focus on the important facts impacting our issues, themes, and theories. Many mundane facts are overlooked as inconsequential. For example, the ages of the children or the date of the marriage. Being the more knowledgeable lawyer, however, adds credibility to both you and your arguments. The better-informed lawyer often walks out the winner. That being said, if you don’t know something, admit it rather than trying to bullshit your way through. An honest mea culpa also creates credibility.

Likewise, know the law. Are you proceeding under a particular statute? Reread it. Familiarity lulls us into false certainty. Because we have read the statute a million times, we’re certain of its terms. But our minds play tricks on us. I’ve often been startled by a helpful (or fatal) clause I’d overlooked. Also, stay current with the case law. Nothing is more humiliating than being jammed by some new decision of which you were unaware. I set aside an hour every Sunday morning to read new decisions. It’s a practice I commend to all. 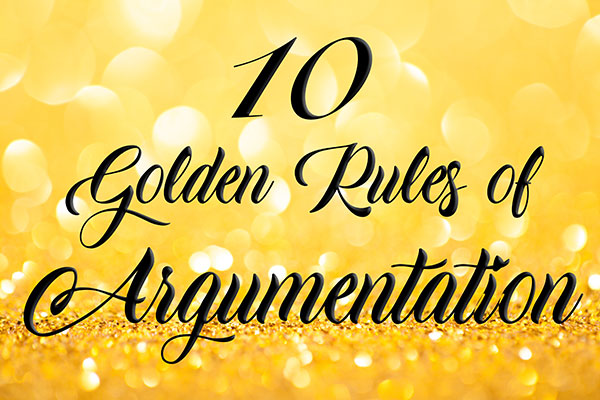 6. Don’t directly argue with your opponent (or the judge).

Proper decorum demands that you address all arguments to the court. Don’t engage directly with your opponent. Judges hate this. (See Tip #8, below, about self-control). Don’t talk over your opponent either. Let them finish before you respond. Fear drives us to talk over or attack our adversary. Take a breath and keep it in check. While it seems obvious, don’t argue with the judge either. Do you really think you are going to win that argument? Such a confrontation usually results from a lack of control or frustration. Don’t do it. Generally, when I find myself fighting the impulse to engage the judge, it’s a pretty good indicator that it’s time for a vacation! But, if you can respectfully point out that the judge has misapplied a fact or misapprehended the law, it’s fair to bring it to their attention to allow them an opportunity to change course.

Particularly when you have limited time, visual aids tell the story better than verbal presentations. Consider a timeline you can give to the judge illustrating important developments. Or prepare an affidavit for your client summarizing important facts. Increasingly our world is visual, and your presentations must be as well. Use these aids to better tell the story, and support your arguments.

What’s harder than not lashing out in the heat of battle? Anger and fear are forever present in the adversarial process, particularly when dealing with unscrupulous opponents. But regardless of the provocation, reactivity rarely benefits you or your client. More often it leads to disaster. Divorce lawyer extraordinaire, Jim McLaren, advises lawyers to learn the art of “taking the spear”. This means to remain unflappable and composed under fire. Self-control is truly a superpower. Strive to maintain it. By the way, many think anger is warranted when outrageous behavior is present. But when you’re angry the judge doesn’t need to be. Stay calm and lay out the facts persuasively to invoke the judge’s anger. Leave your own rage in the parking lot. I often define a win by how well I kept it together at a hearing rather than by the result.

Speaking of self-control, liars truly make me crazy. Today, more than ever, lawyers are shamelessly distorting the facts and law. What to do? First, be the master of your case facts and the law to neutralize the dissembling. Next, remember that you have no control over what comes out of their mouths but you do have control of what comes out of yours. Don’t be like them – tell the truth. Lying is unethical and ultimately fatal to your career. Use your energy to outthink them and plan your response. Angry reactivity dilutes your energy and brainpower.

Aristotle instructed that persuasive arguments require three elements: ethos, logos, and pathos. Logos and pathos are the logic and emotional tug of the argument. Those are crafted case by case. But ethos involves the credibility of the arguer. It transcends the present case. When judges mistrust you, the stain will follow you throughout your career. Be prepared and be honest – the gold standards for our profession.

10. Listen to your opponent.

Listen closely to the windy oratory of your opponent. What information is he or she revealing in the argument? Let them educate you about their theories and themes – helpful information, if not that day, for use later in the case. And listen to the judge as well, both with your eyes and your ears. What does the judge’s body language reveal about your theories? Is the judge eye-rolling or rapt? Is the judge patiently absorbing your presentation or restively looking away? If the latter is the case, it may be time to pull back (if still possible) and retool.

A friend of mine, who went on to become a billionaire real estate developer, was fond of the phrase, “Nobody ever got into trouble listening.” If the Judge is berating your opponent’s argument, keep your mouth shut and enjoy. For some reason, lawyers always feel they need to be adding to the discussion. Often the best thing to say is nothing!

These 10 tips will make you a better lawyer – whether arguing by zoom, in court, or in a settlement conference in the judge’s chambers. Ultimately though, the single greatest superpower is to remember to keep perspective. Lawyers are famous for their large egos. But your client’s life isn’t your life. Disconnect. As the great trial lawyer David Boies stated, “what’s the worst thing that happens to me…I lose?” You’ll do a much better job for your client if you distance yourself from the dispute. Remember Kipling’s brilliant admonishment in his poem, If:

“If you can meet with triumph and disaster

And treat those two impostors just the same…”

It’s not about you or your win/loss record; that’s outside of your control. It’s about doing your best: prepare well, perform well, and stay professional. If you follow these golden rules, you will always succeed.